Finally got some time to throw these together with a little commentary; these are the top 10 aquascapes from the 2007 Aqua Design Amano Aquascaping Contest. The contest, held yearly and open to anyone, is the most significant award in the hobby and garners international recognition. The entries are judged by Takashi Amano himself and other renowned judges. There are some fairly original and interesting ideas in some of these and they are great inspiration! 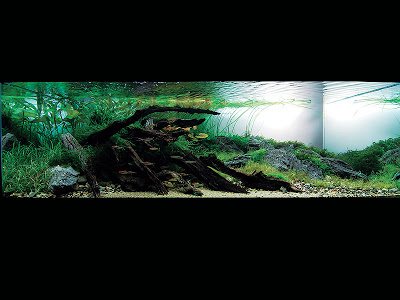 This is a classic Nature Aquarium style tank and the contrast between the heavily planted left side and the open right side create a tranquil border scene complete with sandy foreground. The use of rock and driftwood help to add structure to the aquascape. 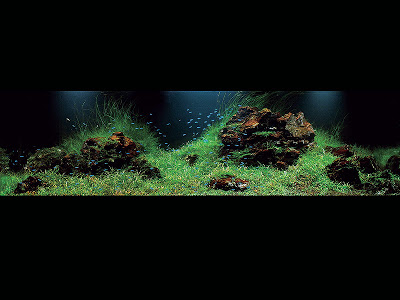 A lovely hillside scene with rocky outcroppings and schools of tiny colorful fish create an idyllic scene in this iwagumi inspired layout. 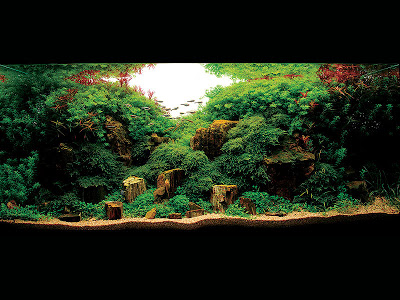 The carefully placed petrified wood in the foreground of this beautiful aquascape combined with the lush, overflowing green vegetation create the atmosphere of overgrown ruins deep in a jungle. The nearly terraced midground creates a beautiful “staircase” effect up to the dip in the plants where a school of fish hover like a flock of tropical birds. This is my personal favorite of the top 10. 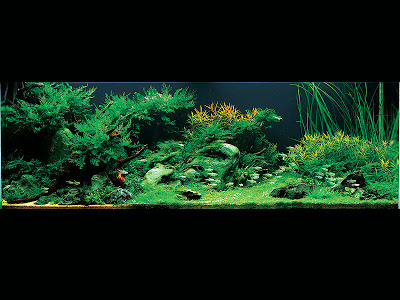 Diagonal layers of ferns on driftwood create a stunning effect coupled with the contrast of the orange-tipped plant on the right side of the tank. The grassy, pastoral foreground complete with a school of fish completes the scene. 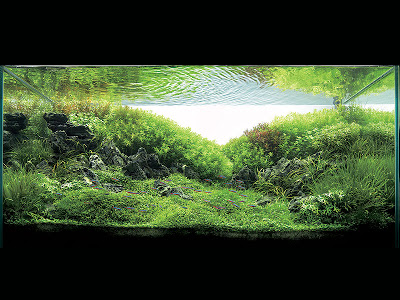 This aquascape looks like a lush mountain, with the two background groups of plants overlapping, creating a valley-like feeling. I love the contrast in colors and textures in this one.

An “island” aquascape, the driftwood adds a lot of interest and I especially like the hint of red peeking over the midground plants. The white sand foreground must be a pain to keep clean though!

This is a particularly interesting aquascape. I’m not quite sure how the designer created the illusion of a waterfall, but it could have been done with sand or air bubbles. Either way, the visual interest of this aquascape is amazing. It’s such a beautiful tropical scene, with lush plants and mosses surrounding a clearing filled with grasses. The slope of the entire aquascape also adds such depth to the scene that it makes it seem much bigger than it actually is. 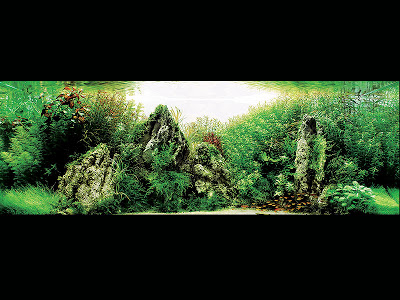 The most striking feature of this aquascape is the vertical rock formations. They are perfectly placed and dotted with all sorts of plants, creating an overgrown, natural look. 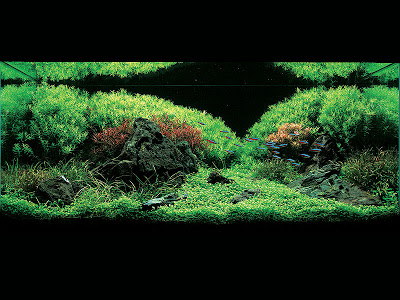 The black background of this aquascape helps to bring out the brilliant green colors of the plants, and the two red plants, on either side of the “valley” provide contrast. 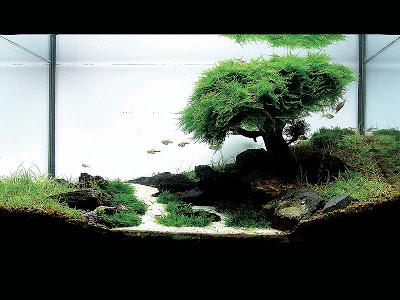 Filipe Oliveira’s entry, this is such a unique and wonderful aquascape. The moss “tree” and the pastoral setting beneath are fundamentally relaxing and pleasing to look at. It’s also the only entry in the top 10 rankings from outside Asia.