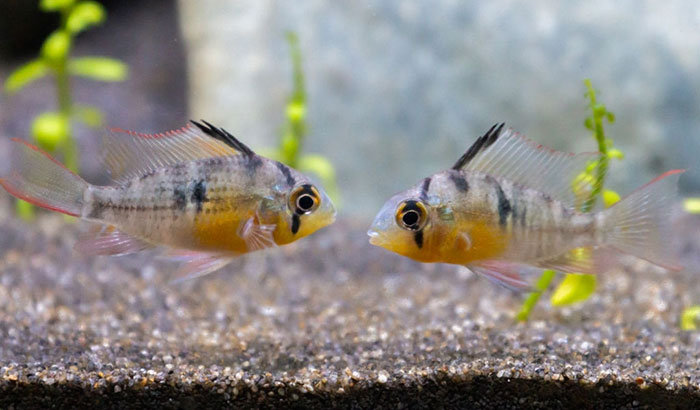 Rams are perfect aquarium fishes because of their colorful appearance and peaceful disposition. The two most common species of rams found in aquariums are the Bolivian ram and the German blue ram. This Bolivian ram vs. German blue ram will compare these very similar-looking fishes and discuss their differences.

These species came from a single fish family, so they have many similarities; it is very easy to confuse them with each other. But their primary differences are in their maintenance level, size, price, and breeding difficulty.

Bolivian and German blue rams are excellent additions to any home aquarium if you want to add a splash of color to the home. However, knowing the differences between these two breeds can help you identify which of them you want.

The first important thing you have to learn about Bolivian rams and German blue rams is they have different maintenance levels.

It is a lot easier to take care of Bolivian rams than German blue rams. If you are not a seasoned aquarist, it’s best to opt for the Bolivian ram instead of the German blue variety.

Bolivian rams are endemic to the Amazon river in Brazil and Bolivia. Other names for the Bolivian ram are Bolivian butterfly, ruby clown cichlid, and Bolivian ram cichlid. One thing that makes them easy to take care of is their omnivorous diet. They eat either plants or tiny organisms.

On the other hand, German rams are inbred, therefore, a lot more sensitive. The water should maintain a stable temperature of 87° Fahrenheit. Furthermore, they can’t stand other species picking on them because of their small size; they would get stressed quickly.

Another reason why German rams are harder to maintain is that they are pickier eaters than Bolivian rams. They will eat freeze-dried fish foods like brine shrimp, cyclops, Mysis shrimp, bloodworms, sinking pellets, and tubifex worms.

Additionally, German rams prefer heavily planted tanks and only one male in the tank. Two males in a tank will fight to the death. Any other species in the tank must be peaceful and more petite than them, or the German rams will get stressed. 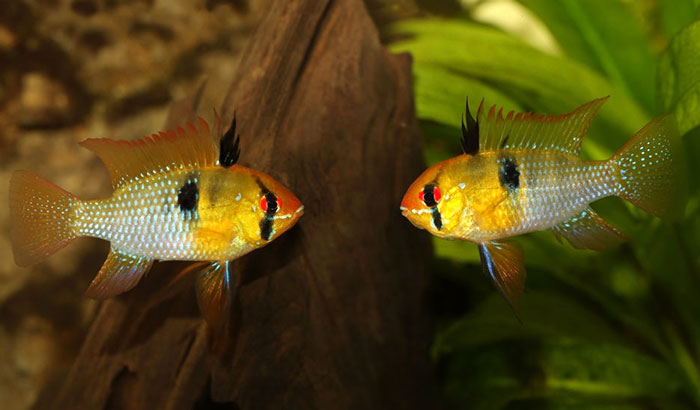 To help you identify Bolivian rams and German blue rams, here are their differences in physical appearance.

Bolivian Rams are Large and Colorful

Despite being more peaceful, Bolivian rams are larger than the German variety; they can grow to around 3.5 inches (8.9 centimeters). These fishes are tough looking yet colorful. They come in many colors and have a unique blue-green shimmer when light hits them at a specific angle. These are beautiful additions to any tank.

Despite its name’s “blue” part, the German blue ram has more colors than blue. It is the most colorful tropical fish suitable for an aquarium. It has shades of blue, white, and gold that contrast beautifully. It is smaller than the Bolivian counterpart, but it is twice as bright and vibrant; they measure around 2 inches (5.1 centimeters). Though these fishes are harder to take care of, their beauty somewhat makes them worth it.

The two species differ on how easy it is to breed them.

Bolivian Rams Breed Without Effort on Your Part

Pairs of Bolivian rams tend to form bonds on their own. A couple of suitable male and female Bolivian rams will stick together and bask in each other’s companionship. Although they can share a tank, the males will hold their territories and defend them if necessary.

They don’t fight to the death, though. If another male wanders into their turf, the defending Bolivian ram will make itself look bigger. If the intruder does not leave, they might lock lips and the first one to turn away loses the territory.

In contrast, male German blue rams need the whole tank for themselves if they’re going to breed. Sharing a tank with a competing male will result in one of them dying. But if the perfect breeding conditions are met, the male will dart around and display its full color to attract a mate. The male will dance and will bring out the best of his colors.

Bolivian rams are slightly more expensive than German blue rams because there is more demand for them. You can find both species easily because of how common they are among aquarists. The Bolivian ram costs around $10, and the German blue ram’s value is near $8, on average.

When choosing which of these fish species are the best additions to your tank, you should ask yourselves the following questions:

If you want to breed but have no experience, it’s best to stick with the Bolivian ram. If you’re going to breed and have enough experience and time to take care of the fish, the German blue ram is a good option.