As a fish tank owner, nothing is more painful than to see your favorite fish floating and lifeless in your aquarium. Do not get me wrong, fish death happens all the time but knowing how to clean a fish tank after a fish dies matters.

It is all about what you do after learning the fish has already lost its life. Usually, the initial thing to do is remove the dead body out of your fish tank. The next steps will be depending on you as the owner of the tank to ensure that no more additional death happens.

Cleaning a Fish Tank After the Fish Died

Many fish tank owners believe in the myth that if a fish dies, it can contaminate or foul the water inside and may kill the other fish. They also think that whatever killed that fish will spread on the water, and changing all the water in the tank is needed.

The belief is inaccurate and does not come with a scientific basis. But still, you want to clean the fish tank as much as possible for the remaining fish. Here is the step-by-step guide.

As I mention earlier, you want to remove the dead fish in the fish tank if you can find it. However, if you have a large aquarium with plenty of fish, dead fish might be stuck behind in rocks, making it impossible to recover.

I tell you, there is nothing wrong with leaving a dead fish inside the fish tank if you are unable to remove it for some reason. The dead fish will only produce nutrients where the filter of your tank can remove it easily.

Step 2: Check on your Filtration System

The most important thing is for you to have a strong filter that will keep the water clean from the waste that was produced by the fish that has died. More importantly, most parasites and diseases need a living host, which means that the death of the fish makes the parasites move to the water column or to other fish.

In addition, you need not worry about removing the fish to prevent the disease from spreading in the tank. Probably, it has already affected the other fish as well, or the other fish has a more healthy immune system which makes them stronger enough to fight the disease.

As a reminder, always remove the dead fish immediately out of the fish tank. If you fail to see or recognize the dead fish for some reason, no need to worry because the tank’s filter will take care of it.

Step 3: Investigate and Test the Water

Every time you find a dead fish in your fish tank, testing the water is essential. Check if the water quality is fine because it can be the cause of death. Immediately test the water and look for a remedy should you find there is something wrong with the water quality.

Meanwhile, if your fish did not die from a particular disease, it is unnecessary to worry about it. Every environment, like the fish tank, always has disease organisms that can lead to being fatal. However, this should be in low numbers, and there is nothing to worry about.

What you can do is give the aquarium a major water change if you like. Wait for a week or two, then you can start adding new fish and get back to normal.

Another option is to run your fish tank as normal for two weeks but without any fish. You can then test the water but expect some ammonia spike because of the dead fish. It will probably be better if the water test was done before the fish died, but that is beyond your control.

Always remember that the disease will not spread if there is nothing to spread to because of the fish removal. Also, parasites usually come with a cycle that will only last less than two weeks. The absence of the fish can kill all the parasites, if there are any.

How to Sterilize Fish Tank After Fish Died 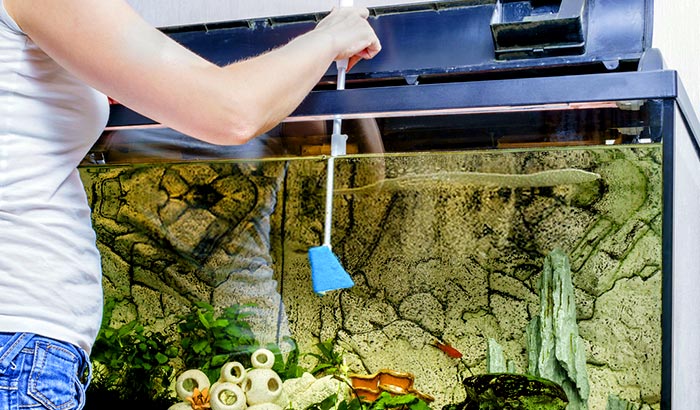 If you feel that the situation is already extreme, removing the bacteria or other living microorganisms is the best thing to do. Here is what you can do to sterilize the fish tank:

You can break the tank completely by bleaching everything. What you do is rinse everything well while filling the aquarium with water. You can also heavily dechlorinate everything.

Then you can do a couple of water changes while dechlorinating until such time that no smell of chlorine can be traced.

Step 3: Removing and Cleaning the Gravel and other Accessories

During this time, you can treat the aquarium good as new. You can remove the gravel before adding bleach. My advice is for you to spread all the gravel under the heat of the sun a few times. This action should sterilize everything.

If you are already doing this extreme step in sterilizing your tank, you might as well throw all your filter media and start fresh. Meaning, you can buy new filters and start all over again. Doing this process is like starting a new fish tank where you need to cycle again.

Learning how to clean a fish tank after a fish dies is essential as a fish tank owner. The most important thing is to remove the dead fish immediately. You do not need to take drastic measures immediately. Investigate and see what the proper action needs to be taken to bring back your fish tank’s normalcy.