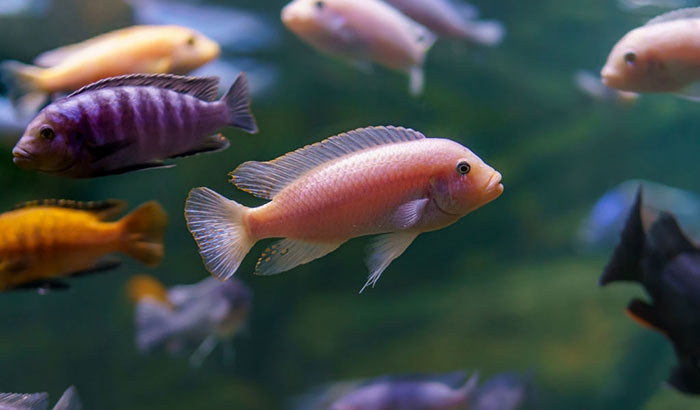 Cichlids are types of colorful, freshwater fish that thrive in Tropical America as well as the great lakes found in Africa. Due to their size and color, they have become a favorite among the fish-keepers. Those who want a colorful fish tank or aquarium must add the cichlids to their wish list.

Cichlids, however, are a demanding type of fish. They need extra care and attention. They are larger than most fish, which requires a larger fish tank.

Most of all, they are quite aggressive and do not easily go along with other fishes. Probably not the most-friendly among your pet fish.

You have to know the varieties of cichlids for you to know which go along well with whom. There are several types of cichlids. Here are they:

They are the most famous of cichlids and the most popular among fish-keepers. They can be found on the great lakes in the continent. All of them are colorful and bright. They are tough, hard, territorial. They are aggressive, especially during mating season.

These cichlids thrive in the tropical regions of South and Central America. They are known for their aggressiveness. The most famous of these types are the Jack Dempsey cichlid, the Convict Cichlid, Dwarf cichlid, Angelfish, and the Firemouth cichlid.

There are also varieties of cichlid that could be found in South Asia and other tropical regions. Some of them, however, are used as a source of food, and not as pet fish. Those found in Africa and Tropical Americas are the ones being kept as pet fishes.

Things to Consider in Choosing Cichlids that Can Live Together

Before discussing the types of cichlids that can live together, there are some things that you as a fish-keeper must bear in mind. Among these are the following:

The size of the tank

Cichlids are aggressive pet fishes. Putting them in a small tank means closer interaction, which can lead, in turn, to constant fighting and quarrel over food, mate, and territory. Having a large fish tank might help mitigate the aggressiveness and territoriality of the cichlids.

Cichlids prefer rocks and caves. It allows them to have their respective territories, minimizing contact and aggression among them. It also gives some fishes, cichlids or others, a sanctuary against larger, more aggressive cichlids.

Since you need to stock your fish tank with lots of rocks and caves, a big, larger fish tank is really preferable, especially if you are going to put different kinds of cichlids.

The aggressiveness of cichlids

Types of Cichlids that Can Live Together 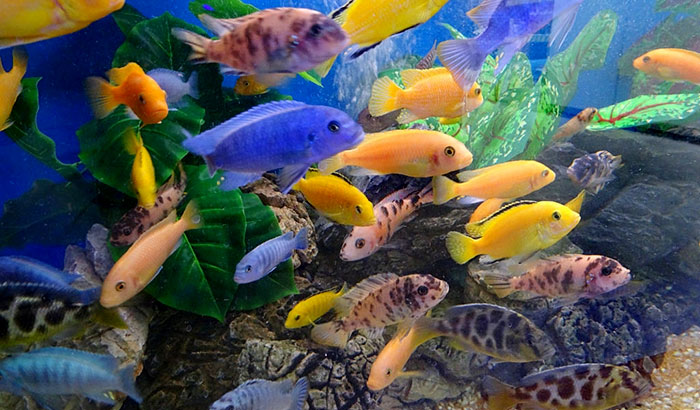 Of all the cichlids, Dwarf cichlids are the ideal ones that can live together. This is due to their size and lack of aggressiveness. Being smaller, they do not pose a threat to their fellow dwarf cichlid, or other cichlids and fishes. They are not that aggressive, though lack of mate may induce them to fight during the mating season.

It is important therefore that you have a good proportion of male to female dwarf cichlids, so that each of them can have their mate.

African cichlids can live with each other, but not because they are not aggressive. On the contrary, they are one of the more aggressive varieties of cichlids. Their coexistence has something to do with the peculiarities each one of them possesses.

Mbunas are smaller than other cichlids, but they are more aggressive. As such because of their size, they do not pose a threat to larger cichlids, such as Peacocks and Hap cichlids. That being the case, their aggressiveness prevented these cichlids from making the Mbuna a fair game.

Because of the balance of nature in terms of size and aggressiveness, Mbuna, Peacock, and Hap cichlids can coexist, though they are far from being ideal tankmates. And if you can reduce the aggressiveness of each cichlid, the better. Putting different colors of cichlids will make them less prone to aggression and conflict.

Angelfish can live not only with each other and other non-aggressive cichlids. They also go along well with other fishes. But since they are not aggressive, it is best not to mix Angelfish with other aggressive fish and cichlids. Having aggressive companions that will constantly bully the Angelfish is unhealthy and stressful.

Angelfish can tolerate soft, acidic water and high temperature. So if you have an Angelfish, better select tankmates who can tolerate the same water conditions as the Angelfish, for most of them are on the harder, more alkaline side of the water equation.

Discus is one of the brightest fish you can ever keep in your aquarium. Like the Angelfish, they are not aggressive. They usually escape and avoid those other aggressive cichlids that are always aching and eager for a fight.

Cichlids are one of the most beautiful, brightest, most colorful pet fish you can have in your aquarium. But having them as a pet requires a lot of skill and patience. You must know their behavior, and know whether they go along well with other cichlids or other pet fish.

Having them as a pet, however, is very rewarding. It can give brightness, light, and color to what would be an otherwise dull, boring fish tank. As a fish-keeper, it is worth the trouble having some kind of a cichlid in your aquarium.