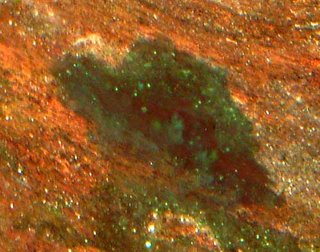 Blue Green Algae (BGA) isn’t like other types of algae you may experience in the aquarium. First, it is not actually algae but rather a photosynthetic bacteria. Secondly, it can fix its own nitrogen (as a result of this complex chemical process, oxygen is toxic to it), and finally, it has different life-stages. This is all very relevant to how it can be combatted and removed from the tank, where if untreated, it will envelop healthy plants and kill them by blocking out the light.

In its most common form, BGA is floating around in your tank waiting to land in an ideal location. It is microscopic and harmless until it moves onto its next life-stage. This is where water circulation comes in. If it finds a dead spot with low oxygen and lots of organic wastes (these usually go hand in hand in a dead spot), it will settle down and begin a colony. Since it can fix its own nitrogen, a lack of nitrates gives it an advantage over plants. If nitrates are not high enough, it will quickly find a dead spot to start a colony and begin growing extremely rapidly. Once it gets its foot in the door, it’s very hard to combat without antibiotics or the most severe weapon in an aquarists arsenal, a blackout.

When in this second life-stage (the colony), it appears as a slime-covered green, bluish-green, or brown patch. If you try to remove it, it tends to stick together in big gooey pieces and it has a very strong smell. The slime is the protective membrane the bacteria forms around the colony. Removing it manually will only temporarily help. In fact, removing it manally tends to make it grow back faster. Since it is bacteria, there is no way to get all of it out of your tank. Dosing nitrates will not have any effect on it now, since it has gained a foothold. It may even cause it to grow even faster (this is what happened to me). Increasing water circulation may or may not work, since the protective membrane protects the colony against oxygen.

At this point, your only options are to treat it with a 5 day course of Maracyn, do a 3-5 day total blackout, or tear down your tank and sterilize everything. I don’t think anyone chooses the last option unless they’re really sick.

Maracyn is erythromycin, an antibiotic effective gainst Gram-negative bacteria. Follow the dosage given in the instructions. Some people are worried about damaging the biological filter of beneficial bacteria. This is very unlikely, as stated on the Maracyn instructions. Instead, people who claim it did damage their biological filter and point to nitrite spikes are often seeing the results of millions of dead cyanobacteria, not beneficial bacteria. These nitrite spikes are often temporary and can be alleviated with water changes whenever levels get too high. The tank should balance out within a week. If the biological filtration was damaged, it would take much longer for these spikes to go away.

The other alternative is a blackout. I don’t recommend this, but if you are against using antibotics or have something in your tank that is sensitive to antibiotics, this is your only option. Just use towels or black garbage bags to block out all light from the tank (not even a tiny crack) and turn off the lights for the duration of the blackout. Leave the tank blacked out for 3-5 days. It will hit your plants hard, some more than others, and plan on loosing some. Although the majority will come out alright, it will take a week or two for them to recover and begin growing again. Obviously it depends in your plants in your tank and how healthy they are going into the treatment.