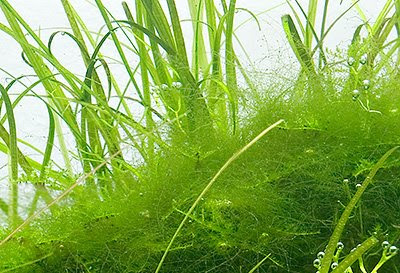 Cladophora sp. (often called Clado) is an aquascaper’s worst nightmare. It’s very branchy and often forms tangles of thin strands, making fluffy “clouds.” It also as a pungent musty odor and is fairly brittle. It spreads via tiny strands which break off when disturbed, then anchor in plants (particularly plants like moss, grasses, and ferns that collect a lot of debris). It is often confused with Hair Algae, which is, well, more like hair growing on fixed surfaces. 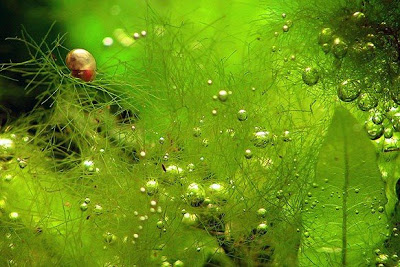 Unlike other algae, cladophora is more like a plant, so it thrives when your plants thrive. It also isn’t spread by airborne spores, but direct transmission from tank to tank. Most often, it is introduced via a new plant or contaminated equipment. The filaments can be very small (smaller than a hair) and can easily be missed in a clump of roots or stems. Some claim that Marimo moss balls, which are a form of Cladophora, can cause it, but I remain a bit skeptical that they can change form so dramatically. 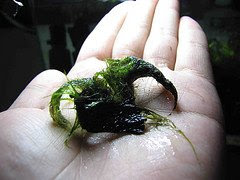 The best way to prevent cladophora is to clean all new plants and anything you put in your tank that may be contaminated with tiny strands of Cladophora. Rinsing won’t get rid of Cladophora, as it is often tangled in roots, leaves, or stems. The best way is to do a quick bleach dip. Preventing this nuisance algae from getting into your tank is by far the best way to ensure you never have to deal with the labors of removing it. An ounce of prevention is worth a pound of cure.

If you already have a bad case of Cladophora algae in your aquarium, you’ll need some luck, and a toothbrush. Start by manually removing as much as you can with your fingers, trying to minimize the amount that gets set free floating into the water by being gentle. Then use the toothbrush to “comb” out any remaining strands, twirling the toothbrush to wrap the algae around the brush. Remove as much as you can. Manual removal is really the best option. Repeat often (every few days). There are no known algae eaters that will touch this stuff.

I also found that reducing the lighting levels helped. The slower the plants grow, the slower the Cladophora grows, and the easier it is to manually remove. Generally it seems that at lower light levels, plants can outcompete the Cladophora. However, blackouts don’t seem to work at all. The worst is when it gets into moss. There’s almost nothing you can do but throw out the moss.

Flourish Excel overdosing is also rumored to work, but I found that all this did for me was make the Cladophora more brittle. Try it out, but it doesn’t seem to be a miracle cure.