In the world of aquascaping and planted tanks, there are two major schools of thought: the Dutch style and the Nature style (also called Japanese style, but not to be confused with the el Natural style which is not a style of aquascaping but an entirely separate approach to keeping a planted aquarium). Both are popular styles that are based on the arrangement of plants in the aquarium and the way it is aquascaped and are by no means the only way to aquascape a tank. Most hobbyists choose to loosely follow one school based on their own personal preference of what they think looks better.

Dutch aquariums are an older style of aquascaping, dating back to early 20th century Holland. The style focuses on neat rows of plants radiating out from a central focal point, with lower plants in front and taller plants in the back (creating depth). You’ll often see this described as “streets” or “avenues” using plants.

Dutch aquascapes also feature more colorful aquatic plants. They can be likened to a well kept garden, where all the plants are arranged with a purpose and kept well trimmed and defined. It may not be the most natural looking, but it is extremely beautiful and visually interesting. A significant hardscape (rock and/or driftwood) is usually not present or visible. Color, contrast, and the beauty of the individual plants is paramount. 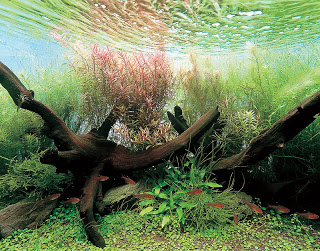 The Nature aquarium style was pioneered by Takashi Amano in the last decade. The style of this type of aquascape is very much focused on nature and imitating both natural landscapes and snapshots of natural environments. This means that a Nature style aquascape can look like a miniature version of a mountain range with tree lined slopes, or like a scene under the surface of a small river. 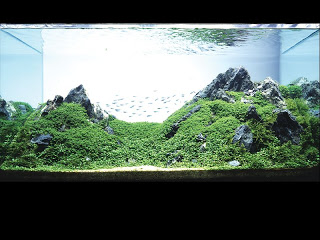 Hardscape usually plays a role in framing the aquascape or helps to create flow. Nature style aquascapes are often also one of three shapes: concave shaped, convex shaped, or triangular. Concave means that the height of the plants decreases to some central low point, then slopes back up. Convex is the opposite of concave, and is often called an “island” shape since the plants are low on either side but high in the middle. Finally, triangular shaped aquascapes are shaped like a right triangle, and the height of the plants slopes gradually from high on one side of the tank to low on the other. In most Nature style aquascapes, there is only one main focal point and it is almost always positioned according to the Golden Rule. Natural appearance, flow, and other Japanese gardening principles are most important

Within each of these styles there are further sub-styles that I’ll explore a little further in another article.