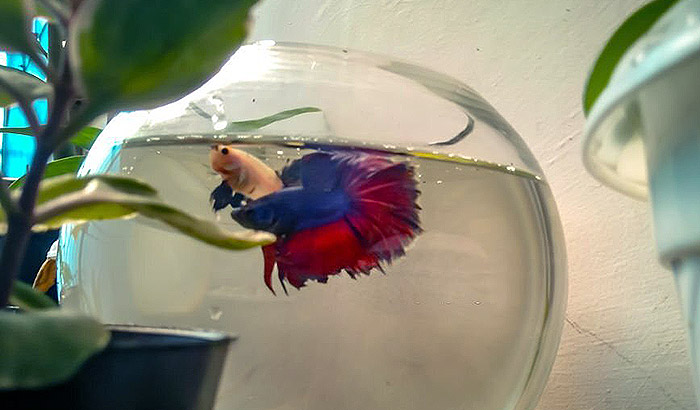 When I was still new to fish keeping, I was always wondering why does my betta fish stare at me. At first, this unique fish habit made me feel anxious and creepy, but I later adjusted to it after some time.

But to answer why betta fish stare at someone, this habit is related to the betta thinking or expecting that the person is feeding them. This fish also needs the attention of the fish tank owner, making them stare when they need attention. Other factors that cause this betta habit will also be discussed below.

Why Does My Betta Fish Stare At Me

Anticipation of Being Fed

The primary reason a betta stares at someone is the anticipation of being given food. When the fish is in your home, they can quickly associate you being the fish tank owner with food. The moment they see you coming into the aquarium, you will notice that they immediately come in front of the fish tank and watch you. This action means they anticipate that they are going to be fed by you.

The perception of the betta fish to the owners is that they are their food provider. It is just natural for the fish to feel that way. The fish comes with this small brain capacity that allows them to recognize the fish tank owner.

This ability to recognize and remember the face will allow them to connect more, especially if you are always seen. The more interaction you do with the fish, the more recognition and bond will be created with your pet.

With all these natural skills of the bettas and the bond created by your constant presence, the fish will perceive you as their food provider. The bettas can quickly associate you with food, which means the anticipation of being fed will always be there when they recognize your presence.

Another habit that betta has is the interest in what is happening outside the fish tank. This situation means that the fish observe anything happening outside, including you, especially when coming to the aquarium to feed them.

It is basically the entertainment of the betta fish, anything that happens outside the fish tank. In fact, it is the only thing that will catch their total interest. The movement, the changes, and all the things happening outside will be their form of entertainment.

Like many other animals, betta fish are also drawn to motion. Any movements happening on the outside will certainly catch their attention. If you have a TV room, it is normal for you to notice and feel that they are watching. They are just curious about the colors and movement of the screen.

Since betta fish live in a confined environment in the aquarium, it is normal for them to be interested in what is happening from the outside. Any activity or sudden changes on the outside will draw their interest, making them observe and stare.

The betta fish has this instinct that makes them focus and eventually stare most of the time. The primary instinct of the betta fish is to watch any movement happening around them. Whether it’s the food or something that wants to eat them, they will need to recognize this movement as part of their instinct.

Bettas need to watch all the time, making them look like they are always staring. It is just their regular routine that makes them feel safe from predators and other threats happening in their environment. They also do this routine once they are in the aquarium.

They are always interested in the contrast of colors and their movement in front of them. But since they are in a secluded environment in the aquarium, they will keep staring at the outside, including when you are in front of them.

When you are close to the aquarium, it is normal for the bettas to recognize you, which results in staring at you. But when you are far away and still stare, it is probably because they are sensing your movement from the outside.

Fish Don’t Have Eyelids Which Make Them Stare

Since it is always an instinct for the fish to keep attention on what is happening around them, they will undoubtedly look like they are staring at you if you stand in front of the fish. If it is bothering you that the betta is staring, you can have the option to give the fish other things to do.

Since fish can quickly get bored outside, their attention will be diverted to what is happening on the outside, which makes them stare constantly. If they can see movement or entertainment outside their tank, they will also be interested in it. Putting a toy in the aquarium can also divert their attention but should not be done all the time because they can get used to it.

The Betta is Just Sleeping

Why Does My Betta Flare at Me 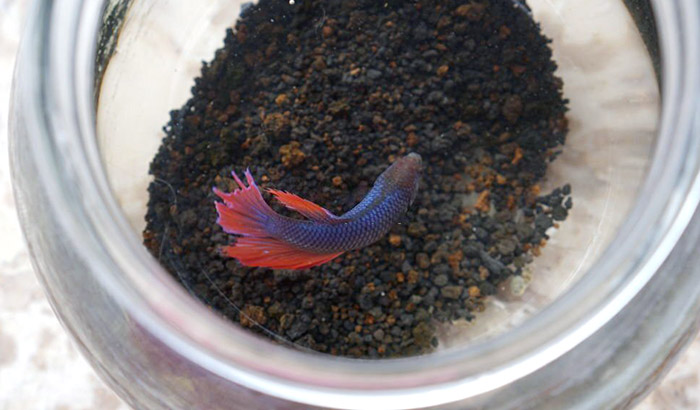 You will also notice that the betta flares at you sometimes. Flaring is a sign that your betta is under stress, especially if it is aggressive flaring. When something in their territory poses a threat to them, the fish will want to get rid of them quickly, making them flare.

These threats include a tank mate, another betta, or even their reflection since they cannot recognize themselves in the mirror. This threat can make them stressed out and eventually affect their eating habits.

Once the betta is under stress, it can be harmful to them if it stays for long. Meanwhile, there are also small instances of flaring, which is manageable since it allows the fish to stretch or flirt with another fish.

Why Does My Fish Stay in One Spot

There will be moments that your betta, or any fish for that matter, stays in one spot. There is no need to worry when this situation happens because it is just normal. The fish is just trying to breathe more easily.

Fish breathe dissolved oxygen underneath the aquarium water. Dissolved oxygen levels are naturally higher near the surface, making the fish stay in a spot near the bottom to breathe easily.

Why does my betta fish stare at me? There are many reasons why a betta stares at someone, but it is natural for this fish species to make this habit since they can recognize people who feed them and has the instinct to recognize movement on the outside. What is important is that this staring habit is usual for the betta and part of what they will do once it is inside your aquarium.