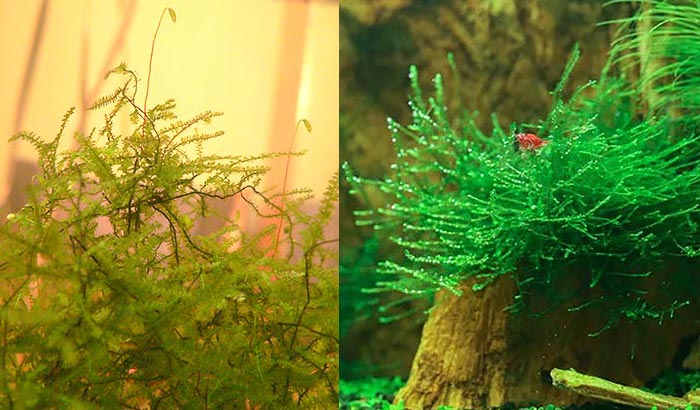 Any avid aquarium keeper would want the perfect greenery in the tank. Aquarium mosses not only add to the ambiance of the tank but also contribute to the well-being of the inhabitants.

Narrowing down your options to Christmas moss and java moss, you want to know the difference between the two. In this article, we will compare Christmas moss vs. java moss. We will study how to differentiate the two in appearance, care, and maintenance, which surface they grow best, and how they can benefit the fish in the tank.

There are subtle differences between Christmas moss and java moss even when you look from afar. To identify them, we will look closely and compare java moss vs. Christmas moss.

How They Differ in Appearance 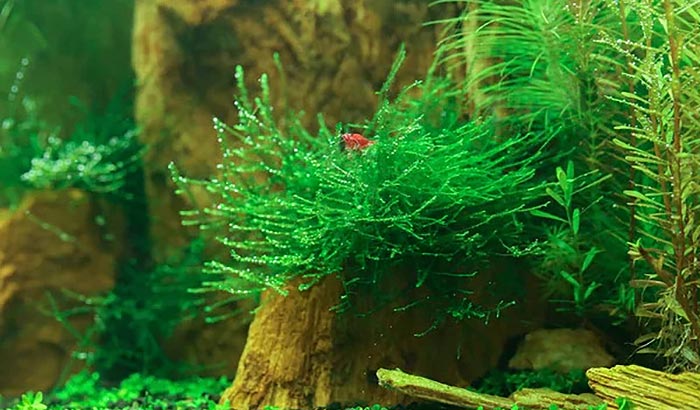 The Christmas moss has its name coined due to the fact that it resembles the branches of a fir tree. It has round leaves with branches that branch out at an almost 90-degree angle with the stem.

It is the ideal moss if you want it to carpet your aquarium tank. Like Bermuda grass on land, it grows fast and flat. It is denser and broader, perfect for covering large surface areas.

If you do not need a carpet on your aquarium floor, you can always let it coat driftwoods and other surfaces in the tank. But you might want to consider that it can grow up to four (4) inches long.

While the java moss also has a stringy appearance, it looks more like a fern than a fir tree. It has oval leaves that would branch out like grass.

The java moss grows much slower than the Christmas moss, but it grows longer, up to 10 inches in length. It can attach itself to all sorts of surfaces, although not necessarily to get nutrients.

Their Ideal Water and Temperature

It is a freshwater moss that needs the pH level of the water to be between 5.5 to 8. To ensure healthy and fast growth, add a healthy supply of carbon dioxide to the list of requirements. Without supplementation, the Christmas moss will grow slower than the java moss.

The java moss is not very picky when it comes to temperature and water conditions. It can survive in both harsh and amicable conditions. But if you want something stable, you can opt to keep the water temperature at 20 degrees to 24 degrees C (68 – 75 degrees F)

The java moss is also a freshwater moss, and similar to the Christmas moss, you would want to keep the pH level of the water between 5.5 to 8. Additionally, you can blow some carbon dioxide into it to stimulate growth but do not be concerned if this is impossible. It does not necessarily need carbon dioxide to thrive.

How to Care For and Maintain 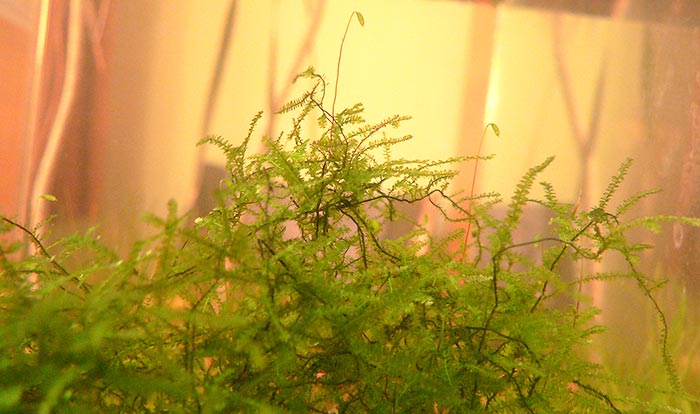 When it comes to caring, the java moss is much easier to manage than Christmas moss. Christmas moss needs constant supervision to grow and survive. You will need to prune it occasionally; failure to do so can lead to it withering away. Pruning is the key to survival.

The Christmas moss does not like high lighting. It prefers to be in

On the other hand, the java moss requires only trimming once in a while, which is not even a necessity for its survival. You can let it grow wild, and it will still live in the house and provide food for the fish in the tank.

If you want to add java moss to your aquarium, you can simply attach it where you want it to grow. But avoid moving it as that will interfere with the process. It is invasive and will likely cover anything that it fancies, so you might want to look out if it goes out of the area you only want it to grow on. To avoid its invasion over surfaces where you do not want it, you can use scissors to trim it before it completely attaches to the surfaces.

Their Benefits and Downsides

Lastly, let us see how Christmas moss vs. java moss compete in benefits and downsides.

If you’re looking for ways to mitigate the nitrogen level in your tank, Christmas moss is the way to go. And if your fish needs a nest to lay its eggs, the Christmas moss is one of the perfect spots. Additionally, it provides shelter to smaller fish and crustaceans for community tanks.

The only downside that should really concern you is the algae build-up that can happen on the top of it. Algae is never good in an aquarium tank, but this can be avoided if it grows in the ideal water condition.

The java moss is well known to be able to soften harsh conditions in your tank. Breeders also prefer putting java moss in their breeder tanks as it proves to be a great nesting place to attach eggs. Its low maintenance status also allows the breeders to focus on their fish and the coming fries.

Once again, the possible problem you may encounter with the java moss in your tank is algae buildup. Aside from good water conditions, adding algae-eating fish can also prevent the build-up.

Venturing this small part of the world of mosses underwater, we are provided with essential information that can help you reach a decision. After comparing Christmas moss vs. java moss, you are now equipped with the knowledge of their subtle contrasts that can make a stark difference to your tank.