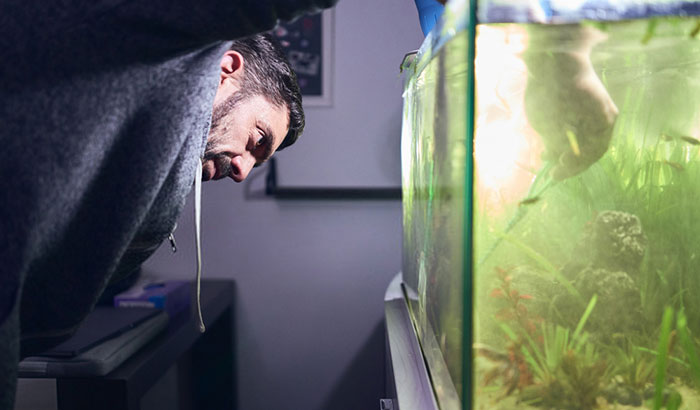 Why Does the Water in an Aquarium Turn Green?

The primary reason why the water in a fish tank turns green is because of algal bloom. You may not see the algae – after all, they can be single-celled microscopic organisms – but the water is green because of them.

There are three primary causes why your fish tank experiences an algal bloom. The causes are:

Let’s examine each of these causes so you can accurately determine why your aquarium water turns green.

Too much light, direct sunlight specifically, causes the water of an aquarium to turn green. Direct sunlight promotes algae growth. Because algae is basically a water plant, it photosynthesizes – just like all plant life does.

If the fish tank receives too much light conducive to plant growth, algae growth also takes place in the water. At first, the algae is too microscopic for you to see with your bare eyes. You can only tell that the water has algae because it is green.

Overfeeding is another potential cause of why the water in the fish tank is green. Unwanted fish food dissolves and becomes nutrients in the water, which algae can use for growth. Just like sunlight, too much food in a fish tank causes algae growth.

This may be quite a shock to you, but there is a chance – it’s actually a colossal probability – that the fish is at fault. You see, fish eat and produce waste. Algae can use fish waste as food for growth. So if you have a lot of fish in the tank, an algal bloom is more of a certainty than a probability.

Of course, these causes of algal bloom are not unsolvable. You can take specific steps to limit the growth of algae in your aquarium.

How to Get Rid of Green Water in an Aquarium 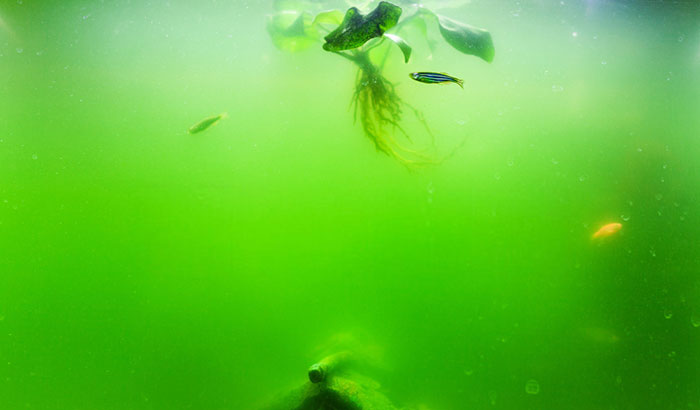 There are many actions you can take to get rid of green water in your fish tank. Here are my suggestions:

Introduce Algae-Eating Creatures to the Tank

I’m not exactly a fan of filtration devices that specifically treat algal problems if I can have more natural solutions. My favorite answer to get rid of green water in a fish tank is introducing algae-eating creatures to the tank.

There are fish, snails, or shrimp (some shrimp species are freshwater) that eat algae. I find that this is the most efficient method of taking care of an algal bloom. For one, I don’t have to worry about the algae taking over the tank. For another, I get to enjoy seeing more creatures blissfully swimming around the tank.

Some examples of freshwater algae eaters are:

Another natural solution I love is placing live aquatic plants in the tank. Aquatic plants can do a lot for the ecosystem in your fish tank. They consume phosphate, ammonia, nitrates, and more. They prevent the water from becoming too toxic for the fish.

Aquatic plants are like regular plants; they clean the environment. They also keep algal bloom at a minimum because they eat what algae eat.

Maintain the Balance in the Tank

Even if you are not experiencing algal blooms, maintaining the balance in your fish tank is necessary. Don’t overfeed your fish, and don’t put too much fish in the tank.

Does Green Water Hurt the Fish?

Because green water is a by-product of algae, it does not necessarily hurt the fish. Algae are not toxic to fish. But too much of anything is not good.

Because algae are living things, they die eventually. And when enough algae die in your fish tank, the oxygen levels in the water drops. This is dangerous to your fish. You want your fish tank to be well oxygenated for your fish to live.

The water in a fish tank will eventually turn green. That’s natural. The water turns green because of the growth of algae. Although algae are not harmful to fish, too many dead algae rob the fish of oxygen, eventually endangering their lives.

As an aquarium hobbyist, it is critical to know how to get rid of green water in a fish tank. You should know how to limit algal growth in an aquarium. The tips I discussed here are all-natural, safe, and even make your fish tank more beautiful.