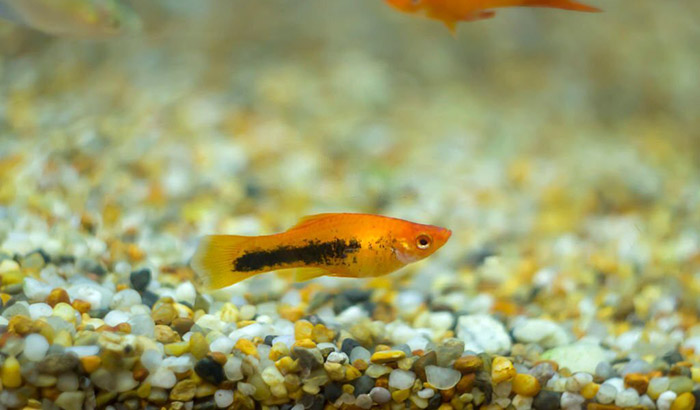 Two fish species that are often mistaken for each other are the mollies and platies. These two species share so many similarities, especially in their appearance. But mollies and platies are entirely two different species, which also have some differences in several aspects.

This article will compare mollies vs platies. In general, mollies look glossier than platies. You can also find the mouth of the mollies facing upward. Other factors can be used to distinguish between the two fish, such as tank requirements, food, and size.

You can tell the difference between mollies and platies through their physical appearance. Generally, platies are small and compressed. So, when you see them on the side, they look normal, but they are flat or narrow from above.

On the other hand, there are many species of mollies, but overall, most of them come with unique shapes and colors. Mollies are also glossier compared to platies, and the mouth tends to face outwards.

Like platies, the female mollies also grow bigger than the male mollies. The male mollies can grow up to 3.5 inches, while the female can go up to 4.5 inches. With the measurements presented, I can say that mollies are slightly bigger in size compared to the platies.

When comparing platy vs moly, these two species can also be differentiated by their color and their physical aspects. For mollies, you will notice dull and silvery colors in most species. The dominant color of their bodies is light gray. However, when the males are mating, they will show a greenish-blue color.

On the other hand, platies are very colorful, but the base colors range from pale yellow to deep black and some different shades in between species. There are also platy species with albino variants, just like the other fish.

In addition, platies which are naturally short and compressed in size, come with a unique triangle-shaped head. The upturned mouth, which I mentioned earlier, has the ability to expand at the widest point. 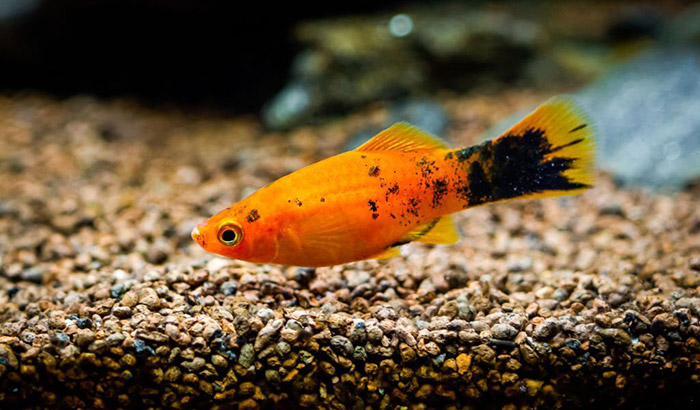 You can also tell the difference between the two fish species by the water parameters and other fish tank requirements they need. Fortunately, both of these fish can co-exists in a single fish tank, which means they have more or less the same water parameter needs.

For a molly, their fish tank requirement starts at 10 gallons of tank and bigger. This size is enough for the mollies to live and thrive. For its water parameters, mollies prefer the temperature of the water at 72 to 78 ℉. The water should also have a pH level range from 6.7 to 8.5, while the water hardness must be at 20 and 30 KH.

Meanwhile, platies can also live happily from 10 to 20 gallons of fish tank. They are generally very tolerant of a wide range of water conditions. Their pH level preference is from 6.8 to 8.0. They also preferred the water temperature from 72 to 78 ℉ while the water hardness is at 10 to 20 KH. Check the table below for the summary of the tank requirements of these two fish species:

Both of these species are omnivores and both species are known for not being choosy. For mollies, they like to eat algae for their meal. Other than that, this fish also enjoys boiled vegetables such as spinach, lettuce, and zucchini. You can also feed mollies high-protein snacks such as brine shrimps, daphnia, and frozen bloodworms.

On the other hand, platies like to eat plants, insects, algae, and small crustaceans in the wild. This eating habit should be copied or reproduced when in the fish tank. You can give flake foods, live, and frozen foods for the platies.

Fortunately, both of these fish species are generally peaceful. They can easily live and coexist with other peaceful species. As for mollies, they are typically easy-going fish. They are usually friendly and can do well with other fish.

On the other hand, platies are also very peaceful fish. They are rarely aggressive and usually enjoy hiking and exploring plants in the aquarium. The only aggressiveness they will show is during the mating season when the male platies show aggression when there are not enough female platies to mate.

Comparing mollies vs platies will give you an idea of the difference between these two fish species. First, they both are entirely different species but share some similar features. Mollies are generally bigger compared to platies, but both are peaceful fish which can be housed together in the fish tank.