Snails are a common problem for most fish-keepers. They will suddenly emerge from out of the blue. Then they will multiply very rapidly, and will quickly overwhelm your fish tank.

Snails in the aquarium come from eggs trapped in most plants that are used as ornaments in a fish tank. Sometimes they are already with your pet fish after it was scooped from the water, making its way, eventually, to your beloved aquarium.

A single snail can lay and hatch its eggs. Snails are very invasive and can easily alter the ecosystem of your aquarium. Ultimately snails can become a scourge in your fish tank. Removing harmful snails from your fish tank, therefore, is a must.

Ways to Get Rid Of Snails In a Fish Tank

There are some ways you can do to remove invasive and harmful snails from your fish tank. Among them are the following:

Plucking them individually, however, is quite messy. But it can reduce the numbers of snails in your fish tank, especially if you do not have other ways available. This method though, will not eradicate them and will not stop snail infestation in your fish tank. You have to use other methods for that.

There are traps and equipment that you can use to catch the snails and greatly reduce the infestation. You can buy snail traps in aquatic stores, pet shops, and online. You can also create your very own snail trap, and there are a thousand ways to have and create a snail trap.

The basic idea of a snail trap is quite simple. You put a container or trap in the fish tank, have enough opening for them to go inside. The trick is to make them congregate on that container. Putting food will surely do the trick. You can remove the container once it has enough snails in it. Then get rid of the snails.

One way of trapping snails without actually using containers and the like is to use lettuce. Lettuce is a snail-drawer. To trap them using this vegetable, immerse the lettuce in hot water, then put it in your fish tank before sleeping. In the morning, you will see snails crawling all over the leaves of the decayed plant. Remove the lettuce and get rid of the snails. 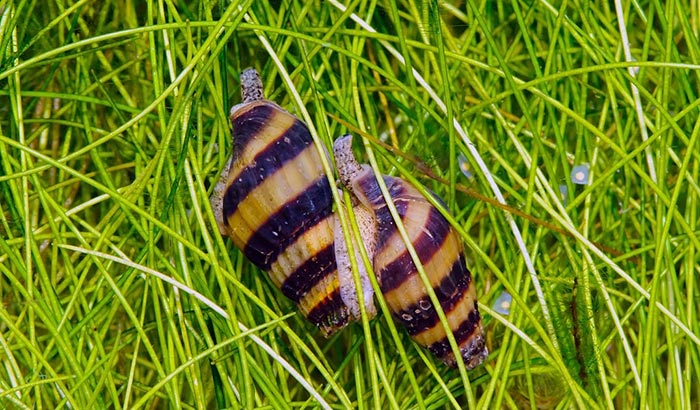 If your fish tank is big enough to accommodate other fishes, you might consider putting some snail-eating fish in it. Loaches such as the clown loach, yoyo loach, and zebra loach are among the more famous snail eaters, especially by those fish-keepers who have large fish tanks. It is not advisable though for those fish keepers who have a smaller fish tank for they grow big.

If you are a fish keeper who has a couple of fish tanks and has a large goldfish, you can try putting your goldfish in the snail-infested fish tank. They consume snails, which may help in controlling the snail population. Don’t forget, however, to bring your goldfish back to its very own aquarium after taking care of the snails.

If you cannot add or put another fish to take care of the snail population for reasons of size or ecology, another organism, a snail itself, might do the trick. You can put an assassin snail in your fish tank. Assassin snails feed on other snails, and having them in your fish tank is a good way to control snail infestation.

An assassin snail is very effective, but also a slow means of handling snail infestation. You have to give a helping hand to your friendly snail by trapping and removing the snails manually. Doing these in tandem with your assassin snail will make the problem more manageable and under control.

You can apply some treatment, such as copper sulfate-based solutions available in pet stores to clear your fish tank of snail infestation. You have to remove as many snails as possible from your fish tank before you apply the solution. Follow the specific instructions so as not to harm your pet fish and other organisms. Remove the dead snail as soon as possible after treatment.

Prevention is better than cure, as they say. The occurrence of snails as such can sometimes not be prevented, and in some ways, even desirable. In small numbers, snails are beneficial to the fish tank. What must be prevented though is snail infestation which might eventually overrun your fish tank, to the detriment of your pet fish.

There are ways you can do to prevent snail infestation. Avoid overfeeding your pet fish, for excess food will be consumed by snails. Healthy snails will multiply rapidly, causing an infestation. Overhaul your fish tank and clean everything, even the gravel, rock, and sand. This is to ensure that no snail eggs remain on these items. Cleaning will go a long way in preventing snail infestation.

Snails do grow and live in a fish’s natural habitat. As such, they are beneficial to the ecosystem. Even in a controlled, simulated environment such as your fish tank, they can be of great help. They consume some excess food and decaying matter, which helps in maintaining a good habitat.

Snail infestation, however, is another matter. We discussed various ways of removing snails. All the methods, however, need the active intervention of the fish-keeper to get rid of snails in a fish tank. As a fish-keeper, you have to maintain a healthy environment for your pet fish.

Though some organisms may do the trick for you, it is your proactive stance that will make the difference. On their own, those helpful organisms can only do so much. As a fish-keeper, you can surely do a lot.