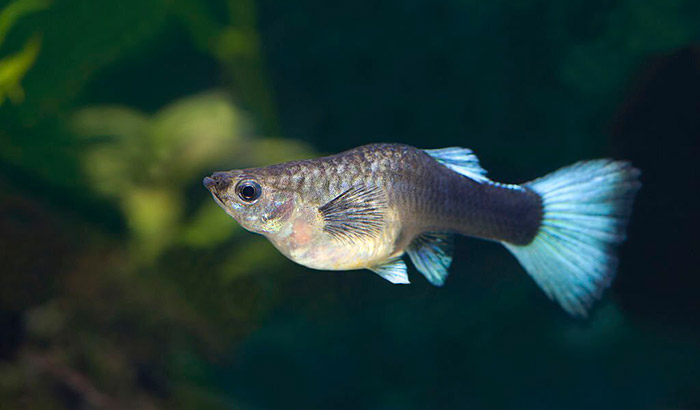 Two of the most intriguing fish species that are often compared with each other because of their physical similarities are mosquito fish and guppy. Both of these species actually belong to the Poecilia Genus, which also includes swordtail and platyfish.

However, these two fish species are different from each other in several aspects, such as size, appearance, natural habitat, and many more. This article will compare mosquito fish vs guppy so that a fish tank owner can easily differentiate them.

For guppies, the size varies between males and females. The male guppies can typically grow from 0.6 inches to 1.4 inches. On the other hand, the female guppies can grow bigger and are estimated to morph from 1.2 inches to 2.4 inches. But there is always an exception to the rule as there are jumbo guppies which can grow up to 5 inches, but it rarely happens.

For mosquito fish, the size of the male and female variety also varies, similar to guppies. When the fish are born, the initial length is about half an inch. But, the male mosquito fish can grow up to 1 to 1.5 inches, while the female can grow from 2.5 inches to 3 inches. With this data, I can say that the mosquitofish is slightly larger compared to the guppies.

The table below will show you the summary of the size of these two species:

Female guppies usually come in gray color, while the male comes with spots, splashes, or stripes that can vary in color. Although, it can be noted that female guppies are less colorful than their male counterparts.

The female guppy’s body is pale but usually displays brighter color in its fins. You will also find gravid spots just below the fin of female guppies, which will grow and turn dark once they become pregnant.

On the other hand, mosquito fish come in dull gray or brown in color. They also have no bars or bands found on the sides and come with a rounded tail. But the most noticeable physical feature is the short body and flattened head. You will also notice that the mouth is pointed upward, which is used in surface feeding.

Guppies also enjoy the aspect of swimming with different groups of fish since they are fast and active swimmers. Guppies also like to spend most of their time exploring other fishes and chasing them for fun and play.

These two species also differ in their natural habitat. The native mosquitofish are usually found in shallow water protected by larger fish. They can be found in Indiana and the Southern part of Illinois in America. They can be found in the Mississippi River and the gulf coast in the northeastern parts of Mexico.

Guppies are generally more expensive compared to mosquito fish. In fact, a fancy guppy breeding couple can be purchased for around $25. Obviously, the price of mosquito fish is lower when it is purchased in the market.

There is a huge difference between mosquito fish vs guppy in so many aspects. Even if they look the same in many ways, they are still of different species. Guppies are sociable and can be kept with other species, while mosquito fish are completely the opposite. They are better kept in a small nano fish tank.