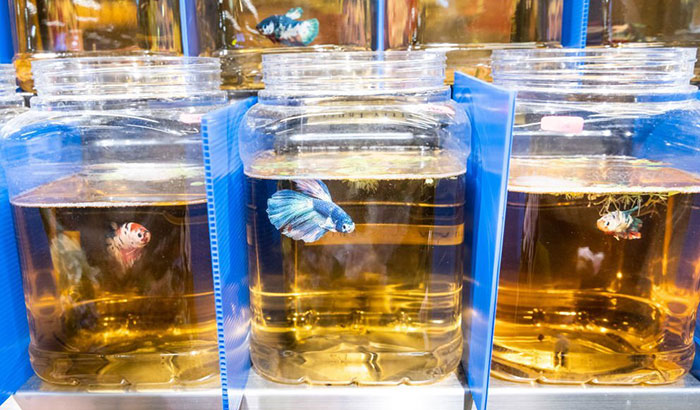 So you have chosen your tank occupier, and you have settled for a Betta fish. When researching how to take care of them, you have found not to keep two male bettas in one tank. Betta fish are known to be aggressive species. But why are betta fish so aggressive? You ask. Related factors are territorial aggression, water temperature, and food supply.

Generally, male bettas are more aggressive than female bettas. They are more possessive regarding territory, food, and significant others.

There are countries wherein male betta fish are reared to be fighters. They would be expected to fight like roosters in a cockpit.

You can expect betta fish raised in isolation to be more aggressive than those grown in groups. They are not used to having tankmates and would easily get threatened.

When male bettas see other male bettas, their instinct is to fight naturally. They also tend to get aggressive when they see similar-looking fish. And when it is the mating season, they get even edgier. They do not appreciate any potential barrier to finding their wives.

On the other hand, female bettas can live with other female bettas and other non-aggressive species of similar size. But this only happens when a hierarchy is set. Initially, a group of female bettas will fight until an alpha female arises up top. When the hierarchy is established, they tend to live in harmony.

Bettas are highly territorial. It is in their instinct to be possessive of their territories. This possessiveness is especially true with male bettas.

When they can avoid it, male bettas will not fight. A fight only ensues when there is no space for one betta to hide and retreat. In a territory, only one male betta should reside. They would make their displeasure known when a trespasser comes to their personal space, especially during mating.

Their obsession with not letting any fish enter their territory can result in a blooper moment at times. When a male betta sees his reflection, he will show signs of aggression. He would try to attack himself but soon stop as he realizes his mistake.

If you have a big tank with a betta and other species, provide a hiding place. Plants are great hideouts for your betta fish. You can also make a partition in the tank, separating your betta fish from its tankmates.

Female bettas are also protective of their territories, although they are less aggressive than male bettas.

If the water is too warm for the betta, its mood can also heat up. Warm water temperature increases the betta’s activity. It could quickly get tired and hungry, therefore, agitated and mad.

Bettas show it when they feel uncomfortable. When they are sick or injured, it shows in their mood. If you believe they should have no reason to be aggressive, you have to check your betta’s health.

Betta fish get so aggressive over food. As with many other species, bettas get aggressive when hungry. They would let you know when they are given too little food to eat.

Aggression against tank mates is also the result of a fight over food. Male bettas are likely to show aggression when they feel someone else is out to get their food.

But what if you put them on separate tanks and gave them enough food, yet they are still being aggressive? You might still wonder, why are betta fish so aggressive?

Bettas need ample space to move around. They tend to get into their fighting mode when they don’t get to move a lot. A small space can also cause them boredom, leading to aggression.

In a tank where bettas live with other fish, they need ample space to avoid confrontation or threatening situations. Ample swimming space and plants are what you need to prevent fights from breaking.

How do you know when they are being aggressive? 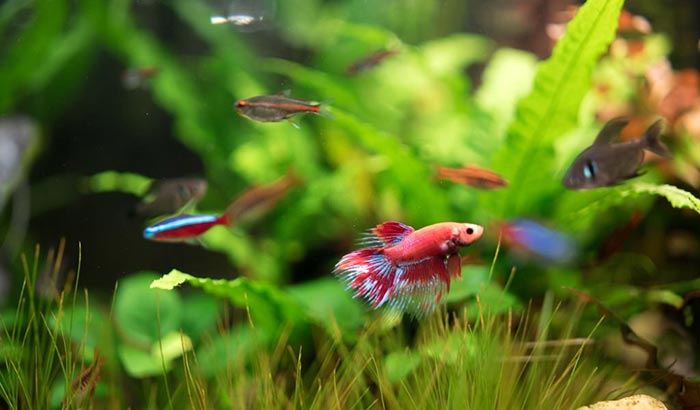 It is easy to recognize a betta’s signs of aggression. It would flare its gills and have fraying fins. Flaring is when the betta puffs out its gills to make itself look more prominent in an attempt to intimidate the opponent. And fraying of the fins shows when it’s been in fights.

Bettas would attack each other by nipping the scales and fins. They would also ram at each other or try to swim directly to the other fish. When you notice signs of fighting, you must immediately separate them.

The best way to stop the fighting is to have only one male fish in one tank. Male bettas can live with other species as long as they are females. They only really fight against males.

Bettas are famous for their long, flowy fins and vibrant colors, and they are infamous for being an aggressive species. Suppose you want to lessen these bold moods. You have to know why betta fish are so aggressive. Understand that it is part of their natural instinct, but there are ways to calm them down potentially.