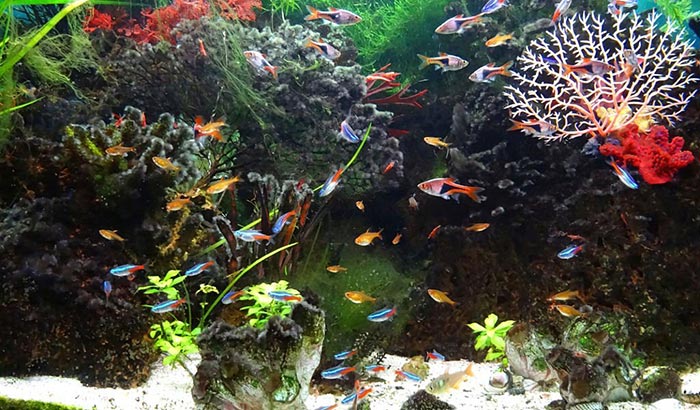 If you are looking for nano fish to add to your fish tank, you may consider a phoenix rasbora or a chili rasbora. You may consider either or both of these. But to decide, you will need to know the difference and similarities between the two. Differentiate phoenix rasbora vs. chili rasbora. Once you know each of their behavior, diet, and care needs, you will be able to decide.

Both the phoenix rasbora and chili rasbora are used to living with a lot of vegetation. Plants in the tank contribute to the rasbora’s health. They thrive in a lush, green environment. Vegetation is also their refuge when they feel threatened, especially when living with larger species. Both specie would appreciate planted and floating plants, loose leaves, and twigs.

Floating plants keep the light from going into the tank. The rasboras do not like a lot of sunlight, so it is positioned in their tank where there is not much light.
For chili rasboras in a tank, remember to keep the tank’s lid on at all times. Chilli rasboras have the tendency to jump around. Without the cover on, they could leap out of the tank unexpectedly.

Fine gravel and low pH level are ideal for nano fish. Since they are tiny creatures, it is best to create a smooth water flow. They will not be able to handle strong currents.

Rasboras also need water filters in their tank. They like their water clear and clean. However, you need to choose the right filter. The phoenix rasbora and chili rasbora are really small; they could easily get sucked in the filter. So choose a soft filter with a screen. 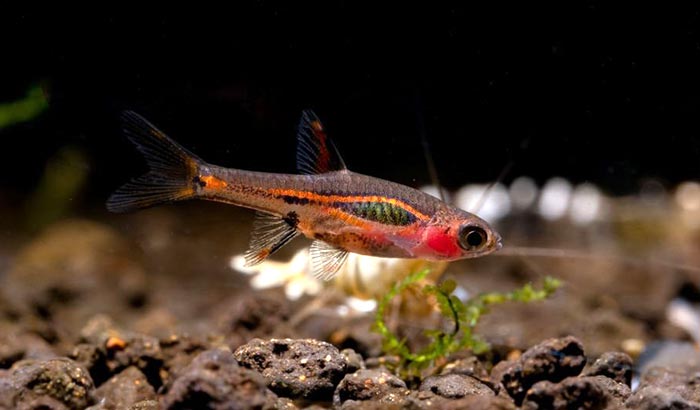 Phoenix rasboras and chili rasboras need a warm temperature to survive. Both need to be kept at 20°-28°C (68°-82.4° F). If you live in a cold temperature, you can opt to use an aquarium heater.

Diet is one drastic difference between phoenix rasbora vs. chili rasbora. Phoenix rasboras are carnivorous. They feed on mosquito larvae, bloodworms, daphnia, brine shrimps, and other tiny invertebrates.

On the other hand, chili rasboras are omnivores, but they prefer meat more than plants. They feed on plankton, worms, and plants. If you choose to get either of them, you can also provide them with fish feed.

Be careful when feeding these nano fish. It is not suitable for them to overfeed. Feed them a total of two times per day only.

Both rasboras can live reasonably long. A phoenix rasbora can live up to 7 years in its natural habitat. However, its lifespan can shorten to 5 years in captivity.

The chili rasbora will likely not outlive its cousin specie. It can live up to five years in the wild but only up to 3 years in captivity.

Of course, if you do your best to take great care of them, they might just live almost as long as they would have in the wild.

Phoenix rasboras love staying in large schools. It proves to be great for their health, and it gives them a sense of security. They do not know aggression against other fish, but they are vigilant regarding food. The phoenix rasbora actively goes after its prey, whether in the wild or in a tank.

Chilli rasboras are an extrovert bunch. They like staying in at least a school of six members. Any number less than that and they will not be very pleased. But they are not exactly pleasant either. Chilli rasboras can be aggressive to smaller fishes; however, this is not always true.

It is more prominent for chili rasboras to be aggressive toward larger species that can steal their food. You can also watch out for aggressive behaviors when it is mating season. Male chili rasboras tend to get territorial at this time.

Their pleasant behavior makes them perfect tank mates for other fish of similar size. Placing them in a tank with larger fish is a significant threat. These nano fish are easy prey to larger fish.

It is not always easy to know which is which among these nano fish. I hope this article helped you differentiate between phoenix rasbora vs. chili rasbora and helped you decide which to get. You can also always get both fish in the same tank. It will be more fun for the fish, especially if you have room to spare.