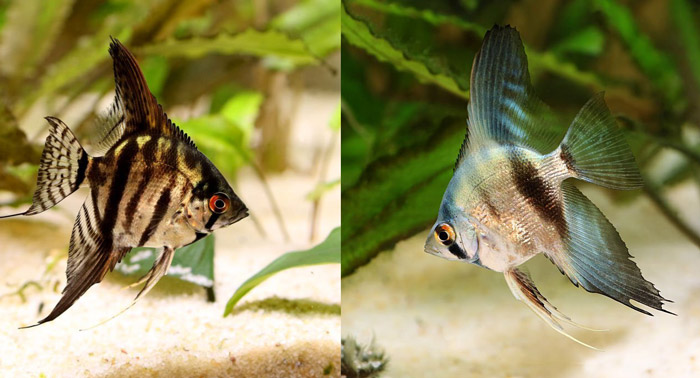 Pterophyllum or more popularly known as angelfish is a relatively common sighting in tanks or aquariums. This South American native fish species has a body shape that lets them hide on vertical surfaces such as plants and roots easily.

It’s quite easy to spot angelfish, thanks to their striking colored stripes. But how do you tell a male vs female angelfish?

The best telltale signs are the fish’s size but there are other ways of differentiating the two genders. In this article, we will discuss how to tell male vs female angelfish.

How to Tell Male vs Female Angelfish

It typically takes six or seven months for angelfish to reach their sex maturity. However, even when they’ve already matured, it can be quite challenging to tell a male angelfish from a female one. One must look closely to see the difference between the male and the female.

Here’s how to tell the difference based on their appearance.

Here’s a table for easy reference in differentiating a male versus a female fish.

How to Tell Male vs Female Angelfish by Observing their Behavior

Even seasoned tank and angelfish owners sometimes have difficulty identifying a female from a male angelfish, despite their physical similarities.

Fortunately, it is also possible to distinguish between the two genders based on their behavior.

The most obvious difference is how territorial one is from the other, with males being more territorial than females. This is especially evident during spawning seasons as male angelfish tend to become more aggressive.

The male angelfish during the breeding time will both shake and fan out their fins to attract a mate. The males, when chasing female prospects, tend to chase other male angelfish nearby. They also are relentless in their pursuit of female ones. As such, an angelfish that seems to be swimming towards another is likely to be a male.

Female angelfish are not prone to chase although they can harm and chase away fish that they don’t like. Plus, females are less territorial except when they are being protective of their young.

One can also tell a male from a female angelfish by observing the way they swim.

A female angelfish will normally hold her mouth slightly above the middle of her tail. Males, on the other hand, normally have their bodies oriented horizontally from mouth to tail

What Is The Best Age To Spot the Difference Between Male And Female Angelfish?

As mentioned, it takes six to seven months for angelfish to fully develop their bodies. This is why one cannot really tell the gender of the fish when they are still young as both genders pretty much look alike

The best time to distinguish a male from a female angelfish is when they are already mature, or when their bodies are already fully developed. This is around the seventh or eighth month after their birth.

At this time their breeding tubes are already formed. The female angelfish have wide and blunt tube shapes while males have a thin and pointed tube shape that’s highly similar to a pencil tip.

While angelfish normally have developed their bodies in the sixth or seventh month, one may still need to wait a bit longer if their development is delayed. Lack of space and poor environment may mean a longer time for the angelfish to reach maturity.

However, a tank owner who is getting an angelfish for breeding doesn’t have to wait long for females and males to mature. This is because most pet shops sell already mature angelfish
In a Nutshell.

It can be quite difficult to spot a male vs female angelfish when they are still small. The differences between the genders, however, become more prominent once the fish matures. Size and body shape are two of the easiest ways to tell a male from a female one. Angelfish behavior can also give them away.